It's summer time. That's the only thing I can think of.

My skin has taken on a nice olive hue, and apparently the Guatemalan in me is making an appearance. Why else would two separate leaders of the Hispanic community get my information at my last book signing? One of them works for the local Hispanic news station, and said he'd like to do a story on me. The other works for the local high school with the students who are struggling to learn English. Both recognized me as Hispanic and thought I'd be a good role model for the community.

While this excites me, it also makes me very nervous. I don't actually ::cough:: speak Spanish. I fumbled my way through it quite well in Mexico, but that won't fly in an interview on TV. And while I made my main character Hispanic exactly to reach that audience and give a better representation of Chicanos growing up in the United States, the possibility of actually fulfilling that anticipated goal is quite overwhelming.

But that is what I wanted. Growing up in Arkansas, I was bothered by the prejudice I often saw around me. Usually it was not directed at me, since I speak English quite well and fit in with my peers. My brother was not so lucky, and he doesn't even look Hispanic. One of his classmates saw my senior picture on my brother's school folder and said, "Why do you have a picture of a Mexican?" To which my brother said, "That's my sister, dimwit," or something to that effect. To which the kid said, "You're Mexican? Wow, we can't be friends."

I know I don't even have to analyze that conversation for you to see all the things wrong with it. But there it is. Hispanics are not well represented in popular media, and I would love to see that changed. That's part of what I hoped to accomplish. I just hope I'm accepted in the Hispanic community... even if I don't speak Spanish.
Posted by Tamara Hart Heiner at 6:00 AM 1 comment: Links to this post

I've spent a lot of time the last few days going through my blog and making sure I only use photos that are Fair Rights or my own. Why? Because apparently giving credit for a photo or linking back to the original site are not enough.

I read a harrowing experience from this author who was sued. Your information is sound and, for me, a lot of it was surprising. Take a moment to read it, and then make sure your blog can't be targeted. Might take you a few hours.

Looks like I'll be using my phone camera and wikimedia a lot more!
Posted by Tamara Hart Heiner at 8:05 AM 2 comments: Links to this post

What's up with Linked in?

Are you a member of Linked In?

If so, what's so great about it?

I keep getting invites to join, and so far I haven't. I figure it's a lot like Facebook and Twitter, and here's what I've come to conclude about those two: they're only worth as much as you put into them.

Which for me, isn't much.

So tell me, is Linked In different? If I'm not very "active," is it going to benefit me?

I'm just curious.
Posted by Tamara Hart Heiner at 6:06 AM 6 comments: Links to this post

Remember that post I wrote about one thing leads to another? Well, after the radio interview, the newspaper called me.

Which led to this: 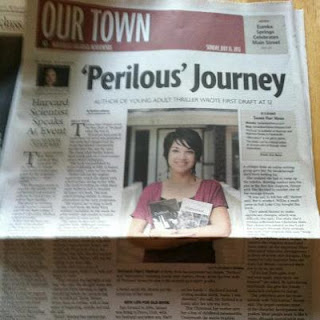 
Moral of the story: You never know what's going to happen next.
Posted by Tamara Hart Heiner at 6:00 AM 6 comments: Links to this post

This is a scene from Perilous that stayed in, but in Jaci's POV. We see what she sees: Ricky and Amanda kissing. What I love about this scene is getting to know what Ricky's thinking as Amanda comes on to him. I simply love Ricky's character. Hope you enjoy it as much as I do!

Ricky flicked the bug off his jeans and looked up, sighing to himself. What did Amanda want now? His irritation faded when he saw her red, puffy eyes. “What’s wrong?”

Amanda stole at look toward Neal and ducked her head, hiding her face. “Can we go somewhere and talk?”

Ricky nodded. “Yeah.” He motioned for her to lead the way, and he followed her through the forest.

She walked until they were out of earshot, and then folded her arms across her chest and glared at him. “I need to know where I stand.”

Crap. Ricky sat down on a rotten log, then bent his head and looked off to the side. Why did girls always do this? He squinted up at Amanda, sunlight filtering through the bare branches behind her. “We just met, Amanda. Aren’t you rushing things?”

She narrowed her green eyes to slits. “Timing has nothing to do with it. I just thought there was something going on between us. But it seems I was wrong. There’s more going on between you and Sara than you and me.”

Ricky laughed, and then regretted it when he saw Amanda’s face. “Hey, sorry,” he said, spreading his hands. “It’s just that you’re completely wrong. She's like a little sister."

Ricky nodded, raising an eyebrow. “So, does that settle everything?”

She wasn’t going to let it go. “Let's just have fun. Try not to be so serious.”

“Don’t you want to know how I feel for you?”

Easy. He knew the answer to this one. She liked him, of course. But he played along. “How do you feel for me?”

She crossed the distance between them in one step, then pressed her mouth to his. She caught him off-guard, but Ricky recovered quickly. He wrapped an arm around Amanda’s waist, pressing her closer to him. The other hand went behind her head.

Amanda  pulled back, her eyes searching his, and Ricky grinned. His pulse thrummed in his neck, and he wanted nothing more than to yank her to him and kiss her again. “I was not expecting that.”

She took his hand. “Did you think I'd never kissed anyone before?”

He shook his head. “I don't know.” He kind of had, actually. The girls seemed so... innocent. Kind of intimidating.

Jaci. Why did Amanda have to bring her up? He fought the urge to take his hand back. “Then she’s a better person than I am.” Too good, in fact. She would never be interested in someone like him.

Posted by Tamara Hart Heiner at 7:04 AM No comments: Links to this post

So, it took me FOREVER to tally things up, going through the blog tour and checking out Twitter and Facebook.


But I have three winners!


Coming in at third place: Alex J. Cavanaugh wins a 50-page critique of something of your choice (if you're not a writer, a $5 amazon.com gift card)


And second place: SA Larsen wins a lot of five YA books
Finally, coming for first prize: Old Kitty! She wins a $20 gift card to Amazon.com


Email me, folks, and we'll figure out how to get your prizes to you!

Posted by Tamara Hart Heiner at 6:00 AM No comments: Links to this post

May Old Acquaintance Be Forgot

I get it. I really do. I understand why a patriotic song would have a line suggesting that those who live here embrace their new heritage and let go of the old life.

But we don't really want to forget people we've met, even if they are only an acquaintance, even if we only met them briefly and have never seen them since.

The absolute most hilarious thing happened to me yesterday at work. I was waitressing, as normal, and a lovely family came in, a husband and wife with two little children. We chatted, I served them, and I went about my business. Lots of patriotic songs were playing on the radio, and I kept singing along.

As they were walking out the door, my manager said something to me, calling me by name. And the woman turned to me and said, "Tamara... did you ever go to Camp Noark?"

She said, "I heard you singing and thought that was you. And then when he said your name, I thought to myself, 'That has to be her.'" She told me her name, and I wished so badly that I could remember her. And then she said, "I was there that year--you know, the year with John."

Memories flooded me, a dozen a second, and I pressed my hands to my mouth and shrieked, "Oh my word!" The year of John will live on in infamy in my mind. Girl Scout camp was always an amazing experience, with everything you need for one amazing summer. It's only lacking in one thing: boys.

That particular summer, though, the camp owners' son, a 15 year old boy, worked as the dishwasher in the kitchen. He also worked as a lifeguard during pool time. Now, I have no idea whose brilliant idea that was, but of course you throw one boy into the midst of 300 girls, and what happens? He's suddenly the only water in a sun-scorched desert.

As if that weren't enough to make it memorable, that summer John developed a crush on one of the campers: Me. Girl Scout camp is not supposed to be the place for relationships, but John took full advantage of all the giggling girls, using them as messengers for notes and friendship bracelets and who knows what else.

It was one of the funnest weeks of my adolescence.

Fast forward to yesterday. I had a total and complete flashback in that moment, fifteen years later. I'd forgotten all about John and that summer and all those girls I spent my time with. And I think that's a shame. I'm so glad she remembered me, that she took a moment to speak to me! May old acquaintances be remembered. Amen.
Posted by Tamara Hart Heiner at 6:00 AM 2 comments: Links to this post

One Thing Leads to Another

A few weeks ago I spoke at a summer camp for writers. They were an awesome audience, and I thoroughly enjoyed it. I didn't get paid for it and I didn't sell books. While I always tell myself that I'm making connections and building future sales, I always kind of wonder.

And then last week the instructor at the camp contacted me, asking if I'd be willing to be interviewed on the radio.

Really? Willing? Isn't this what we all beg and hope for??

So today I have a radio interview. I don't believe it's a live interview, which means I'll get to listen to myself on the air sometime... next week? I really don't know.

This might not lead to book sales. But it leads to exposure. It helps my name get out there. Which is always something!

I'm tallying up the results from the blog tour this weekend. So this is your last chance to make comments and tweet/facebook about ALTERCATION!
Posted by Tamara Hart Heiner at 10:08 AM No comments: Links to this post